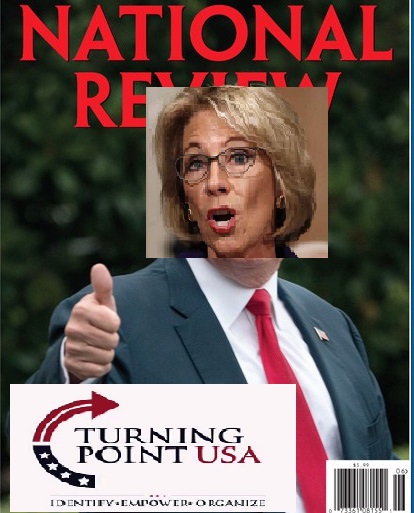 Turning Point USA is part of a nexus of conservative campus organizing that produces both hard right paleo conservatives and actual fascists through a web of activism and long term media training. Betsy Devos, aside from being a headliner at the current conference, is a long term funder of this network along with her husband Dick Devos and son Rick Devos.

The connections of hardline white supremacists and this nexus are well documented. Turning Point USA is a major sponsor of the Leadership Institute, which former head of the neo-nazi Traditionalist Workers Party Mathew Heimbach both attended and encouraged his followers to attend. Former Proud Boy Jason Kessler and organizer of the fatal Unite the Right rally in Charlottesville last year wrote multiple articles for The Daily Caller under contract until his ties were revealed. Scott Greer, deputy editor of The Daily Caller, has been photographed with Richard Spencer amongst other white supremacist personalities.

The national personalities and overlap between organizations and personnel is mirrored locally in Columbus. College Fix reporter and OSU Student Amanda Tidwell also interned at the Daily Caller. She was active in building the Trump campaign on campus in 2016. According to sources who infiltrated the groups during that time she was in a number of text group chats that had leadership overlap with the local Daily Stormer Book Club which is associated with the notorious Daily Stormer website run by local neo-nazi Andrew Anglin. She is currently a top tier reporter for The College Fix.

The Devos family is one of the key financial lynchpins of this network. Dick Devos, former Amway chairman, sits on the board of trustees of the National Review. He also chairs a foundation in the name of his parents called The Richard and Helen DeVos Foundation. This foundation has given money to the College Fix as well. As reported by Inside Higher Education, the money is laundered through yet another conservative “charity” called the Donors Fund. This is not the only racist program the Devos family funds.

The College Fix serves a source of interns, who later go on to work directly for the National Review. The Daily Caller in turn reprints articles that first ran in the College Fix. Both publications report favorably on the activities of Turning Point USA, effectively serving as college level Ivesta and Pravda, although there is little to no Pravda in the Ivesta turned out by either.

Sometime after Betsy left the household of the Prince family (her brother is war criminal and blackwater founder Eric Prince) she found Dick and became a Devos. Betsy and Dick made a little Devos named Rick. Rick sits on the board of the College Fix, which in turn gives his Mommy and her boss Donald Trump positive publicity at every turn. Locally the point of interface between the College Fix and the Daily Stormer was students for Trump. There is no available leaked data from other campuses, but it would appear as though the interface between conservatives and fascists on other campuses would likely follow a similar pattern.

So together we have Dick running the National review, Rick running the College Fix, Dick and Betsy passing money to Turning Point, and Turning Point recruiting minors still in high school to be their troops on campus. Some of those troops will be funneled to the Leadership Institute, which trains fascists. The Daily Caller reprints articles from the College Fix. The National Review picks up the reporters when they are done with college. The family paying for this is tied to a private military corporation and the President. One of those family members is in charge of the Education of the entire nation.

There is a straight line from high school through a fascist training program to a national publication funded by some of the most powerful billionaires in the country and the direct supervision of a Presidential appointee. However the mainstream media zeros in on Jeff Sessions comments about a failed Democratic party boss.