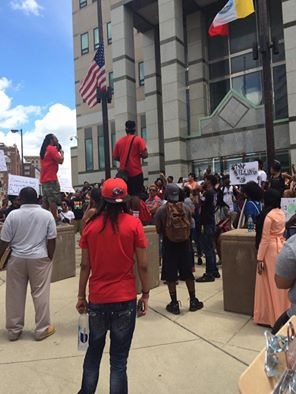 After the murder of police murders of Alton Sterling in Baton Rouge and Philando Castile in St Paul, activists working for justice for the murder of Henry Green V redoubled their efforts with two events in two days and the promise of many more to come. Both were attended by large crowds. The mood at the first was somber and defiant while the mood at the second was just defiant. The City and County Administration has doubled down on their silent cover up, refusing to give Henry Green's family even the slightest attempt at a direct explanation.

On July 8 over 450 people gathered at the Franklin Park Conservatory for a convergence and speak out lead by several community groups that featured Henry Green's family and attorney, Sean Walton. The connection between Henry Green's murder and the cases of Philando Castile and Alton Sterling were but in the context of growing anger across the nation about racist police murder. “For the last two years black America has been on fire,” said organizer James Hayes “and we have been rising up and fighting back against police terror in our communities.”

Green's mother, Adriene Hood, a US military veteran with 20 years service, spoke at length about serving her country and then loosing her child to police gunfire without warning one block from the family home. Henry Green IV, Green's father, recounted the story of learning about the death of his oldest son from his youngest daughter.

Green's family has been consistently seeking answers and been consistently and systematically ignored or insulted by the City and County administration. The mainstream press has given uncritical bandwidth and editorial credibility to the police narrative of their reasons for shooting Henry Green. The family attorney, Sean Walton, re-read the official statement given by Columbus Police Sgt. Richard “Dick” Weiner within hours of the shooting. This statement claims that Green fired upon officers. Green was not wanted, had no criminal history, had a license to carry a concealed weapon and was walking calmly with a friend a block from his home.

Walton shared the family's letter to the City and County Administration demanding answers. It was four pages long and demanded an answer within one week. That letter was officially delivered in person by the family and activists to Ron Obrein's office on June 15. A week went without a response. The letter was sent again. The Columbus Police responded on July 8 late in the afternoon. The response a nearly a month later was a three paragraph reiteration of department policy and bland reminder of an “ongoing investigation.”

The quality or even existence of an investigation was directly questioned by Sean Walton who is in possession of statements by multiple witnesses that have not yet been questioned by the police. The Police version of events, given by Sgt. Dick Weiner, makes claims based on the statements of unnamed witnesses that would have had to have been questioned within an hour of the murder of Henry Green. The identity of the police “witnesses” remains unknown, and in a context that places their very existence in doubt.

Other members of the crowd took turns speaking out against the recent wave of documented police shootings of black men across America. The exact figures vary between sources, as there is no established, central or uniform tracking of civilians murdered by police in America.

Despite the scatter shot nature of the available information all sources indicate that the rate at which people have been killed by police since Ferguson has increased, and that this increase has accelerated in the last six months. This uptick in police violence against the public danced hand in hand with increasing police secrecy.

The event, which opened with a brief speech from organizers and rousing heartfelt song continued until the park closed at dark. The crowd remained thick for the entire event and the general sentiment to both continue and increase struggle seemed to be universally shared.

On July 9, a flash mob took over appeared at the Statehouse at 1pm. Over 700 strong it blocked traffic on High Street briefly and several powerful speeches were given. Activists are planning an increasing tempo of actions over the coming weeks and months.