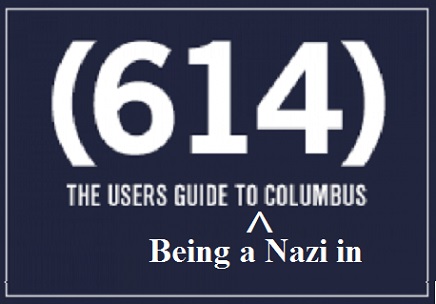 The saying goes, edgelords gotta edge. That would apply here except there is nothing edgy about 614 Magazine. The publications actual non-advertising content (which is thin) has never been very interesting. It's like the New Yorker for frat boys with a second grade reading level. The rest of their content is bar ads and stories about bars sprinkled with a mumbled review of whatever Dave Mathews Band knockoff is on it's latest “world” tour... of the arena district. When I worked at the Columbus Free Press it was referred to as “Eat here you drunk yuppie fuck monthly.” around the office.

The journalistic standards of a glossy rag that amounts to being the trade publication of the downtown restaurant industry sank below the level of the underground paper friends of mine put out in junior high with copying stolen from the public library. 614 Magazine gave uncritical support to a neo-nazi group in an article without a by line. The article began life as a 177 word news blurb about the recent Proud Boys march in Dublin this past weekend. For comparison, the Mockingbird article covering the same event weighs in at 424 words, which actual makes it a news short.

Yesterday, August 21st, they posted a morning “update” that began with this

“Following an uproar of opinions from the community regarding the Proud Boys demonstration on Sawmill Rd over the weekend (scroll down for full story), 614NOW reached out to the Columbus chapter as well as the Southern Poverty Law Center for statements.

SPLC returned our call for questioning with, “We have no comment on the Proud Boys event in Columbus.”Below are the Proud Boys Columbus chapter’s unedited responses:”

That is 103 more words for a total of 280. The wording in the paragraph is telling. “ Following an uproar of opinions from the community” means essentially shut up snowflake you are not entitled to an opinion. The editorial staff is at best trolling their own comments section and at worst telling people who might not be in the mood for a beating from a violent hate group to be silent, keep your opinion to yourself and be indoors unless you are slurping down overpriced craft beers from our advertisers in rapturous worship of our suburban edgyness.

The unedited responses amounted to 676 words. That is 70% of the article's total word count. 676 words answering two softball questions to “update” a 177 word article and 68 words of contempt for the public at large.

70% of an article in Columbus' leading food and drink rag was written anonymously by a Nazi and printed without attribution. Regardless of the source, regardless of the story, basic journalistic integrity requires that stories have by-lines. Sources names can be withheld from the reader is there is some fear of retaliation, as the Mockingbird has done, ironically against the Proud Boys. 614 magazine could have found that out while researching the “community uproar” by using the search function at the top of the page. Since they are semi-literate drunks I'll provide a picture:

It might be too much for them to rely on a competing publication in the same market for research so they could just do this instead:

Doing that search this morning, 22 hours after 614's posting, yeilds these as the top two non-sponsored and non-video hits:

They could have done some basic investigative work without even leaving their desks and completely torn the Proud Boy's statement to shreads. They could have selectively quoted it and dismantled each quote.

They could have interviewed the people that took the pictures. One of those people, who has asked to remain anonymous, has received threats from the Proud Boys both personally and to his place of employment. 614 Magazine could have asks the Columbus Police what kind of nothing they are doing about that.

Instead they chose to print unedited nazi propaganda without attribution. Further, they allow they asked specifically about the “Kekistan” flag. That is the green one in the photo of the event below. They failed to figure out the Orange Flag or the Yellow Flag.

The Orange Flag has the symbol of the Dutch Fascist Party. The Yellow Flag has a symbol that is a Proud Boys wreath surrounding a stylized ax and a fascis. That is a literal fascist symbol. 614 Magazine did not even look at the pictures they themselves published and ask any questions. They choose instead to give space to nazis to criticize “community uproar”.

Several Columbus activist groups in the peace and justice community began coalescing around a boycot of 614. The Dispatch media group has a joint distribution deal with 614 magazine. They are getting boycotted. That means no interviews, no statements, no press releases, no advertising buys, nothing until heads roll.

The Mockingbird can not boycott 614, they are our competition, we already do not give them anything. If we did, we would stop. Actually that's not true. We give them shit and we wont stop until some editorial heads roll. Nobody with the word editor in their job title is worthy of editing a high school underground paper. They should take up gardening or some other profession that does not involve speaking to or about the public.