After the speech about 30 Proud Boys briefly verbally clashed with protestors outside before leaving. McGinnes drew his sword to threaten the crowd, as can be seen below. He did so on a crowded street in full view of armed police officers. Fox  was quick to cover for the Proud Boys and the NYPD claiming, 'Antifa strikes again - swords and vandalism at New York GOP office,' suggesting the violence came from the left, despite the fact that Proud Boy's founder Gavin McInnes appeared with the sword. 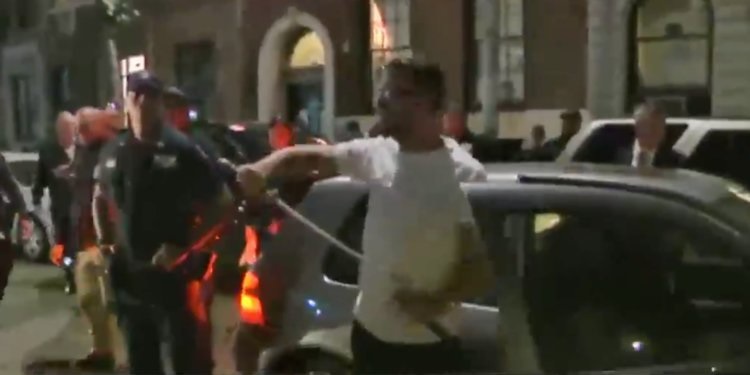 As the fascists left, their police escort left them. Immediately after that there was a fight some two blocks away where video of the group stomping three men on the ground was taken by passers by. While they were screaming “f**ot* the Proud Boys were not arrested when police returned. They were let go with a chummy set of smiles and waves while their victims were arrested for assault, harassment, and petit larceny.

The three men have been identified. One was 35 year old Caleb Perkins. The other two were 20 year old New School Student Kai Russo and 20 year old Finbar Slonim. Both Slonim and Russo lived on the Upper East Side and appear to be walking home in their own neighborhood. Slonim is a life long resident, having wrestled at Bronx Science High school before graduating in 2016.

None of the three men have any apparent political orientation or connection to anti-fascist groups. They may have been informed as to who the gang of fascists were, but have not been claimed as affiliated with any group present. The Proud Boys have been targeting perceived enemies on the left with spates of several seemingly coordinated attacks around the nation happening every few weeks.

Slonim's late father, beloved red-carpet reporter Jerry Slonim, was a man renowned in Hollywood circles as being the not-paparazzi paparazzi. He was the show biz reporter who had the patience and clout to actually get the interviews and the internet is littered of photo of him with celebrities rather than photos he took of them.

Slonim's family connections to show business, as well has his mother's income and vacationing habits are already being exposed by fascists on the web. Even some of his childhood photos have circulated on twitter. For the Proud Boys, this victim of one of their two mass attacks in two nights is a member of the gay cosmopolitan elite and therefore a preferred target. Slonim' s sexual orientation is not known to this publication. Perhaps he was targeting for being insufficiently macho to win a ten to one fight on a Friday night while walking in his own neighborhood.

There have been some vague mumbles about fascists wandering down the streets of Manhattan in groups of 30 and beating up random passersby because they were “f***ts.” Mayor De Blasio and Centrist Champion Andrew Cuomo have both made statements and called for some kind of NYPD investigation.

It is not clear what the NYPD have to investigate other than their own officers, again. Should an actual investigation take place, it will undoubtedly clear the police as it always does. As time moves forward, we will see if show business and Manhattan society can defend one of their own lesser scions against beatings by fascists and subsequent arrest by police on some of the most upscale streets of America's largest city.

What is clear is that the head of a fascist organization can whip a crowd up for murder of their political opposition and then literally set them loose on the streets for enact mayhem on people going about their business blocks from their own homes. If people resist, they will be arrested.

The arrests will be followed by vague sad puppy noises from leading Democrats who hope to make the correct noises in order to maintain their monopoly on the so-called “resistance” while the police they directly employ yet again protect mobs of men in uniform shouting “Trump Trump Trump” and “F****T” on the streets of the largest city in the nation.

This reporter is wondering if the canards of “free speech” or “law and order” will be invoked again and when.