My Journey to Standing Rock The Navajo man stands tall against scudding clouds and a bright blue Dakota sky. Nearby, four others sit in the tall grass, waiting for a tow truck to arrive to rescue a stranded pickup truck pulling a trailer laden with supplies. No one speaks. The companionable silence is interrupted only by the susurrus of wind and whispering of the prairie grass. I take out my smartphone to take a picture. The Navajo man, who goes by Emerson, turns his head to look directly into the camera lens. His expression is ambiguous yet compelling.

Emerson and the other men and women are part of a group who have journeyed for thousands of miles across the country to deliver aid to the protestors of the Dakota Access Pipeline at the northern tip of Standing Rock reservation, near the town of Cannon Ball, North Dakota.

This image strikes me as the perfect symbol of the struggle that indigenous peoples have dealt with for centuries in their quest to protect their sacred lands, the environment as a whole, their civil liberties, and their various vibrant and diverse cultures. Native American tribes have found ways to stand tall against adversity throughout European and American colonialism and into our contemporary age. And the very political and economic structures that were promised to them as the means with which they would arrive at some vague notion of equitable co-existence with the white race has broken down on them repeatedly, leaving them stranded in poverty and marginalization.

Standing Rock is one of the latest iterations of this struggle. Energy Transfer Partners and their corporate business associates (as well as certain banking interests) are the main drivers of a proposed 1,200 mile oil pipeline to be built from the Bakken oil fields in North Dakota that will wend its way out to refineries in Illinois. ETP claims that this pipeline will create thousands of jobs and strengthen America’s energy reserves against foreign price manipulation of crude, among other benefits. Native Americans, particularly the Sioux residing in the Standing Rock reservation, counter by saying that the pipeline will threaten the environment and result in the desecration of their sacred lands. And indeed, the latter accusation has borne out as bulldozers tore through Sioux burial grounds over the Labor Day weekend in early September despite numerous legal motions to review errors and omissions in the permitting process that ETP submitted at the beginning of construction.

In addition, indigenous warnings about environmental risks carry extra weight in the aftermath of an oil spill from the Husky pipeline in Canada earlier this summer—resulting in over 55,000 gallons of crude spilling into the North Saskatchewan River. The crude oil flowed downstream from the site of the break and washed up onto the shores of the Cree Nation reservation. Hundreds of wildlife have died from the oil spill and cleanup efforts are still underway months later.

In Standing Rock, the Native Americans protestors have come together in determination to prevent such environmental catastrophes from ever happening. And whilst doing so, they have faced biased persecution by the local police force and attacks by the private security personnel hired by ETP. This sort of discrimination and violence is nothing new to indigenous peoples. Their history is rife with such conflict.

Yet for all these tragedies, they’ve persevered and continued to survive (and in some places, thrive). In large part this is thanks to their ability to band together and support one another. The history of Native American civil rights battles is an expansive subject beyond the purview of this article, but what is worthy of attention here is their ability to organize and adapt. 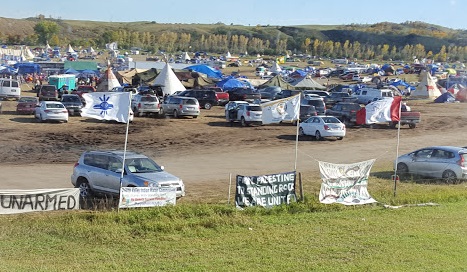 For 42 hours, I’ve been part of the supply run organized by the American Indian Movement chapter operating in Central Texas. AIMCTX is a non-profit organization composed of people from diverse backgrounds and cultures whose mission is to achieve “Indian Sovereignty” and preserve and transmit the spiritual values of native tribes. We left San Antonio just after 9 p.m. on Thursday September 29 and drove north through the Texas panhandle, then the Oklahoma panhandle, and into the vast open countrysides of Nebraska and South Dakota. Our caravan consists of an old Dodge van (with squirrelly handling that causes the vehicle to sway from side to side unless piloted with Zen-like focus by a good driver), and a more recent model Ford crew cab pickup truck. Both vehicles are pulling trailers loaded with aid supplies.

Just a couple of hours out from the protest site, on a stretch of Highway 6 north of Eagle Butte, oil entered the radiator system of the Ford and exploded in a geyser of superheated sludge from under the hood. I’m not sure anyone else appreciated the synchronicity of this break in the oil distribution system and subsequent contamination into a cooling system not designed for oil causing the breakdown in the engine of this pickup truck which was bound for a destination where an oil distribution system, if built, could one day result in a break that will contaminate oil into an ecosystem not designed for it.

I am also struck by the equanimity that everyone displays from this unexpected setback, and how nearly everyone driving down the highway stops to offer aid. The white and non-white people here are of a breed of compassionate individuals that I find very touching.

After a few hours the situation is resolved and we’re back on the road. We crest a hill and suddenly the sparse landscape explodes into a collage of colors, people, and vehicles. The river plain that stretches out before us hosts a manmade forest of tents and tipis, parked buses and semis. Two rows of parallel poles, flying the flags of dozens of Native American tribes, form a central boulevard which runs through the middle of the camp. Clusters of port-a-potties, tents, and makeshift kitchens stretch out on either side of this boulevard, dotted with campfires. Later, I learn that there are an estimated thousand people in the camp that day. Men, women, and children represent nearly all the indigenous tribes of North America. There are whites, blacks, Asians, Hispanics, and activists from overseas countries residing here as well. This is the Standing Rock protest.

Amidst the smells of wood smoke, horse manure, sage, and fried foods, we disembark and begin unloading supplies at the main donation area. Our arrival causes a stir. People surround the truck and in an instant our road weariness vanishes as we are caught up in the excitement and energy of the crowd. Some of the people here have been without warm clothes, tents, feminine hygiene products, and toiletries for weeks. At night, the temperatures drop to the upper sixties but the powerful gusts of wind from the north make the air feel dozens of degrees chillier. Volunteers at the camp site help us unload boxes and jumbo-sized trash bags filled with clothes, and direct us to various tents. I find myself carrying several boxes of children’s books to the library tent—welcome sources of diversion for the many children and young people who are here with their families.

The expressions of gratitude are heartfelt. I find myself deeply moved by the outpouring of warmth from everyone at the camp. A native boy of no more than ten years of age climbs onto our trailer as it empties and beats on a drum in steady time as he sings a song of gratitude in his native language. Later, a middle-aged man sings a gratitude song from his own tribe in a booming voice. Women weep in joy as they pull thick blankets and sweaters out of the donation piles. Someone brings over fried bread for us to snack on as we continue unloading supplies from the trailers and carrying them to various parts of the camp.

Later, I ask Emerson what he thinks the camp’s protestors still need. I expect him to answer with what he sees the camp is lacking in material items. And sure enough he lists off things like firewood, stoves, and heavy tents designed to withstand cold and wind. But then he also says that the Native Americans need “prayers and ceremonies and sweat lodges and spiritual support.”

There have been rumors that this protest camp is comprised of militants who are instigating violence against the employees of the oil company building the pipeline. The dreaded appellation of “terrorist” has even been thrown around to describe these protestors. This could not be further from the reality of the situation. The nonviolent nature of this protest is readily evident to anyone who takes the time to visit the site for themselves. Domestic terrorists do not bring their children to sites where they intend to instigate violence and mayhem. Nor do they sing prayers of peace and love in their native languages and setup camps designed to last through the winter if their intention is to cause bloodshed with impunity.

The reality of this situation is that many different Native American nations have congregated in Standing Rock, under the spirit of unity, to peacefully protest the construction of an oil pipeline that desecrates their sacred lands and poses catastrophic environmental risk. As Emerson explains to me over the phone after I have returned to Texas: “Indigenous people are really getting together from South to North America. People from all over the world are siding with us, to defend us against these corporations. This is not just the United States. This is international.”

Thus far, it has been the Cannon Ball police department and the ETP security forces who have committed unwarranted acts of harassment and violence against the protestors.

Two days after I returned, there was a report (accompanied by video) of protestors at the construction site being threatened with shotguns by Cannon Ball police. The unprovoked and out-of-measure response to the peaceful protest in Standing Rock is endemic to the Native American experience. This is the apotheosis of social injustice. As Americans, standing for the spirit of freedom, justice, and the pursuit of happiness FOR ALL, we cannot allow this ongoing event to go unnoticed nor unchallenged. We cannot condone the behavior, driven by power-mongering and greed, of ETP and its representatives. The nations of the Native American people have united under this cause. As they have for centuries, they will stand tall in the face of breakdowns. They will stand tall not because it’s the right thing to do.

They stand tall because it is the only thing to do. 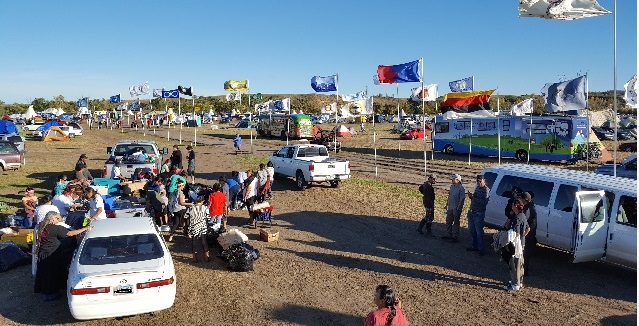