Los Angeles, Philadelphia, and Atlanta are all Democrat controlled Sanctuary Cities where local police departments are prohibited or restricted from working with ICE, but the mayors of all three cities have appeared to green lighted the inter-agency cooperation. Thus they have complied with President Donald Trump's all capital letter twitter demand for “LAW AND ORDER.”

In Los Angeles it began with a day time sit down protest to defend the barricades on July 3rd. This resulted a not yet disclosed number arrests, some of which are pictured below.

The action moved to the East Coast on the night of July 3rd through 4th, with police attacking a march from one camp in Philadelphia to another with particular brutality. This yield the video at the top of this story. Local police attempted to stop anyone from taking pictures. The right to film police activity is guaranteed under the Constitution and has been affirmed by decisions of the Supreme Court. A total of 29 people were arrested with an as yet unknown number being beaten. 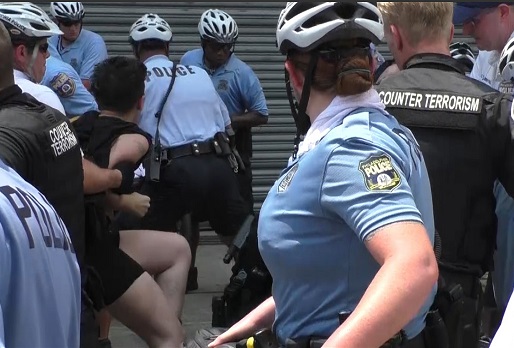 Like the previously attacked camps in Portland, Chicago, Tacoma, San Diego, Detroit and Louisville, the tent cities remain in place. They are now located proximate to federal property. Blockades can be reactivated at any time and the #OccupyICE movement continues to spread. The Mockingbird will continue to cover these protests as they develop.

Meanwhile, The Young Turks, a left-democrat aligned news source has done some investigative digging on a new initiative by ICE to further militarize itself. 5,000 M-4 carbines, the standard issue rifle of the United States Marine Corp were recently purchased by ICE to add capability to their Deportation Tactical Units. And additional 8,000 rifles are expected to be manufactured and delivered by Colt Arms. 48 Ice Agents are being trained in “counter-terrorism” interrogation techniques by a contractor with CIA ties.

It is not clear were on the organizational chart of the Department of Homeland Security tactical units, the 13,000 rifles ordered by ICE and the CIA trained interrogators connect to each other. In addition to covering the #OccupyICE movement, the Mockingbird has allocated investigative resources to this issue and will report our findings.