Since the current Congress has been seated, the Senate has confirmed 2 Supreme Court Justices, 29 Appeals Court Justices and 60 Federal District Judges. That is 22 percent, 16 percent and 9 percent respectively for a total of 10 percent of the entire federal judiciary. While some consider this to be the inevitable result of something to do with Russia, there has been a fair amount of surrender without even a whisper. Only in the last two days, as even ardent Democratic bootlickers scream from inside the beltway, have the theatrical complaints begun from a lame duck caucus more concerned with compromise aimed at so-called moderate Republicans begun.

Twice in under 60 days, Congress has gone into recess with Democratic leadership under Chuck Schummer, while agreeing to allow Senate Judiciary votes in their absence to confirm federal judges. This resulted in 15 district judges confirmed in August and 12 district and 3 appeals judges confirmed this week. The Democrats may not have been able to win a vote, but they failed to force a vote or raise and procedural challenges for over one third of Trump's total judicial appointments.

Senate Democratic Leadership let the first 15 go right on by without even a whimper in August hoping to look civil and save their feigned outrage for the Kavanaugh hearings. They essentially gave Mitch McConnell appointments without outcry so they could go home and campaign to keep their seats while screaming they are the only hope for the nation.

They agreed again on October 11th, so they could go home and defend their seats against the same Republicans they triangulate to win over on one hand and then vote with them, as Senator Machin who represents coal and pharmaceutical concerns based in West Virginia did on Kavanaugh.

As Schumer cut his deal, other Centrist leaders were setting themselves up to pretend they had no idea, so that they could spit out a soundbite during near-election news cycles if they were to decide it was to their advantage. As the ramped up beltway insider hand wringing amplified they brought it out, starting on twitter, as is a standard with many well curated denials. This progressed to press releases yesterday October 17th. 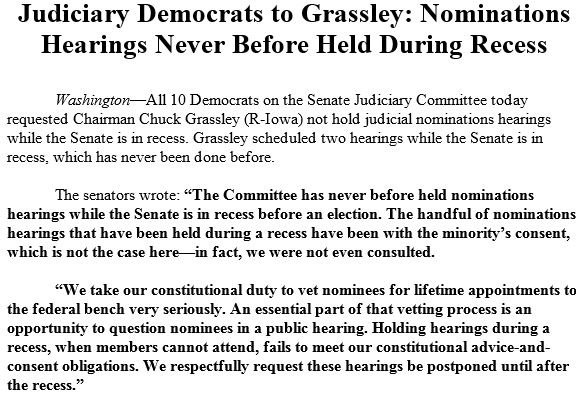 Feinstein started with “All ten Democrats on the Senate Judiciary Committee...” The Senate Minority Leader gave away the farm a week before. The complaining outside their offices began three days before the tweet.

Feinstein complains about needing the recess to campaign. She is the Senator from Silicon Valley. She has the safest seat in the Senate and is worth billions of dollars through her own and her husbands investments. She does not need to fly back to San Francisco to knock on doors. As long as there is a D next to her name she can chair committees like the intelligence committee, where she can vote for more drone warfare to benefit her billionaire husband.

What the Feinstein admitted, right there, when she said “The Committee has never held nominations hearings while the Senate is in recess before an election.”, is that never before has there been a more complete surrender of both power and principals by her party.

Meanwhile, New York Times, America's paper of record ran with the headline “Judiciary Hearings Undermine Senate Truce” this morning. This is an outright lie as the hearings have clearly been shown to be a part of a post-Kavanaugh truce. That truce came after a first “truce” that surrendered 15 judgeships in order to ineffectively fight Kavanaugh. One wonders if the multiple rape accusations against the now confirmed Supreme Court Judge would have been mentioned by Feinstein at all had they not been leaked from her office.

The Democrats call whatever it is they think they are doing “The Resistance.” This is as if they were an actual material or even verbal resistance. Three votes could have been forced on every single nominee, one to close debate, one to confirm in committee and one on the Senate floor. Quorum could have been forced on every vote. This would have frozen the Senate solid and been actual resistance based on principal. Every single one the nominees, even the ones that Centrists are totally okay with because of their first level of “bipartisan” compromise, would have taken much longer and the damage spread over time and until after the election. Instead Feinstein and Schummer surrendered 10 percent of the federal judiciary for 30 years because they need time to go fund raise from Wall Street and Silicon Valley respectively. That is what a sitting Senator from either coast with a safe seat for life does during campaign season.