For Election Integrity Advocates it has been a very interesting six days in Iowa. In addition to the various candidates campaigns, the shadowy outline of a campaign to rig the election has come into full public view. It began with the suppression of a pre-election poll that showed Sanders very much in the lead. Next it was revealed that the DNC had written a special, at the time believed to be untested, cellphone app for the reporting of caucus results. Then the app utter failed to actually deliver the results while connections were discovered between the app developers and the Buttigieg campaign. Buttigieg declared victory and began his rat like scurry off to the next contest in New Hampshire despite no votes being officially counted. While this was happening, it was revealed that a phone jam had been organized by Trump operatives to disrupt the secondary phone precinct reporting method and that the app had in fact been tested by members of the intelligence community working in the private sector.

Today, the DNC has moved from minor interference in the count to working on behalf of the Buttigieg campaign. This has happened at the same time that reports were coming in from so-called “satellite” precincts at colleges and in majority non-white areas of Iowa. The delays in the count stretched out and it appeared that the reporting was done in the order of which precincts would most favor Buttigieg. Despite all the tampering, some of which will be shown below, Sanders continued to gain ground, surpassing Buttigieg first in absolute number of voters and later and in the arcane metric of SDEs (State Delegate Equivalents). Right as this happened, Buttigieg made the phone call and now there will be a “recanvass” to further delay and alter the outcome until February 29th. This is a new level of incompetence in election rigging as the unique ability of campaign workers to record the caucus totals and proceedings has shown numerous instances of fraud.

Let's begin with a precinct in Cedar County. The method of awarding SDE's is to multiple the votes by 8 and then divide by total number of voters and then round off the number and then award delegates. If a candidate gets more than 4 delegates then the precinct get a bonus delegate. As has been seen in more than one place, less than half a delegate for a centrist candidate, in this case Buttigieg, is rounded up rather than down as it should be. Thus with 28 out of a total of 51 votes, Buttigieg gets 11 SDE's while the combined majority gets nothing. The popular vote of 33 people is silenced either way, but Buttigieg getting more than four delegates turns his total into 11. The caucus should have awarded him 3 delegates, instead he got 11. Observe: 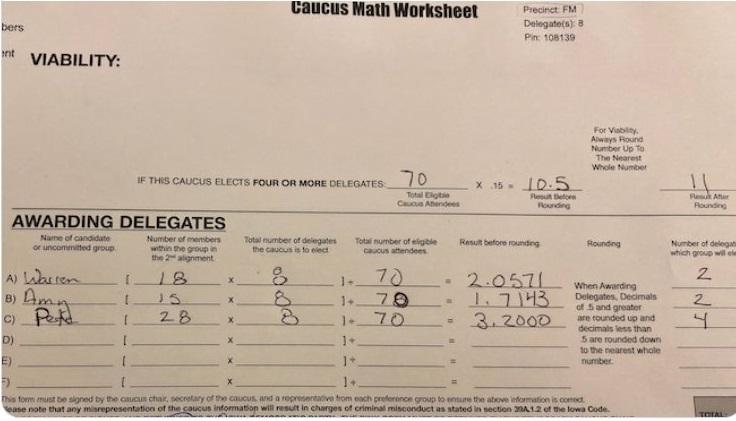 This is not the only rounding “error”. Below is a tally sheet from Polk County. Note that the DNC favored centrist candidates, Buttigieg and Biden, were rounded up when below half while others were not. In the end, with 30% of the total vote Buttigieg gets 30 delegates. In other places this is called minority rule. 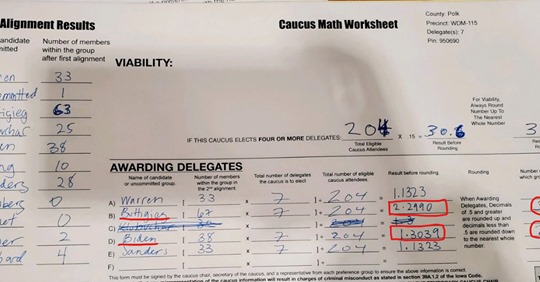 Where tally sheets are not available other evidence has come to light. Many people have taken to twitter to send either results or visual evidence of tampering. Like the evidence show below, where Buttigieg numbers were again vastly inflated: 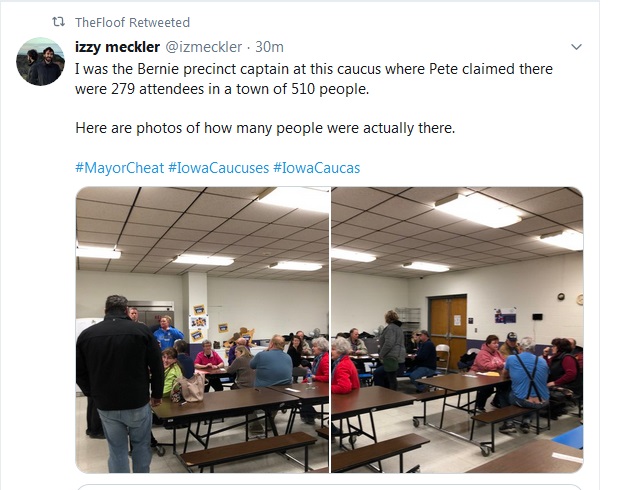 Where ties happened in delegate counts, the decision to award was made via coin toss. In 2016, the last time the DNC was in Iowa, there was obvious cheating in this portion of the system as well. Clinton somehow won 6 out of 7 coin tosses, which is highly improbable in an actually random coin toss. As the video at the beginning of this article shows, at least one coin toss modified in favor of Buttigieg. “Modified” means altered openly on video, because election fraud can be done in the open with help from the party and the mainstream media.

At the state party level, more “modification” place. In Black Hawk County, one set of results were put sent to the state, and a completely different set of results were “officially” reported to the media. As can be seen. Sanders had 511 votes disappear like the middle class dream of home ownership. Some of these votes wound up belonging to Warren. This is not a case of delegate math, which we have seen is funny, this is raw votes. These are citizens who voted and had their votes thrown away because they did not vote for the establishment candidate. 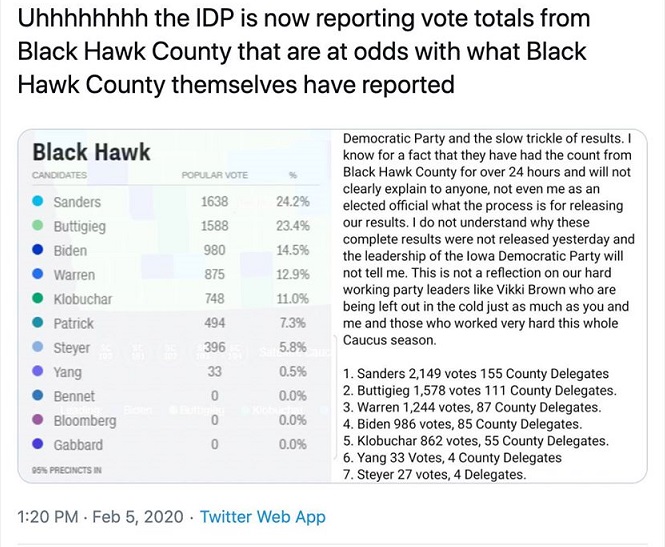 Despite the results being altered, Sanders was still going to win. Thus Buttigieg claimed victory, and the results were reported slowly, in order of what was most favorable to the DNC's chosen few. Thus big city precincts were reported last, while more conservative areas that were more in favor of Biden and Buttigieg in this election and Trump in the 2016 general election. Observe: 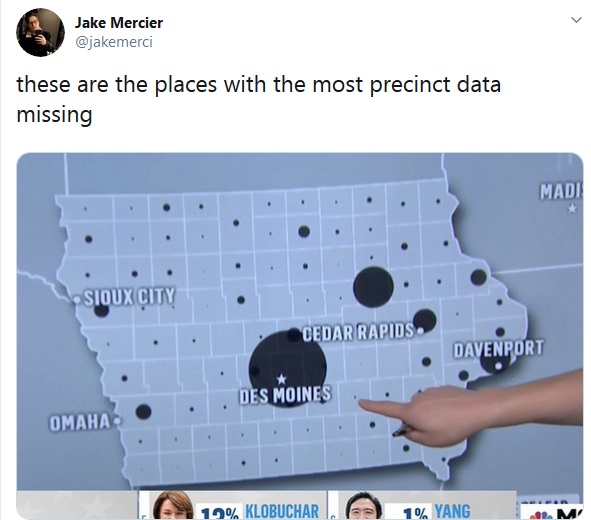 As it became clear that there were “irregularities” and Sanders was winning the popular vote, the mainstream media, led by the New York Times, began only reporting the obviously cooked numbers of SDEs in order to help legitimate the fraud. 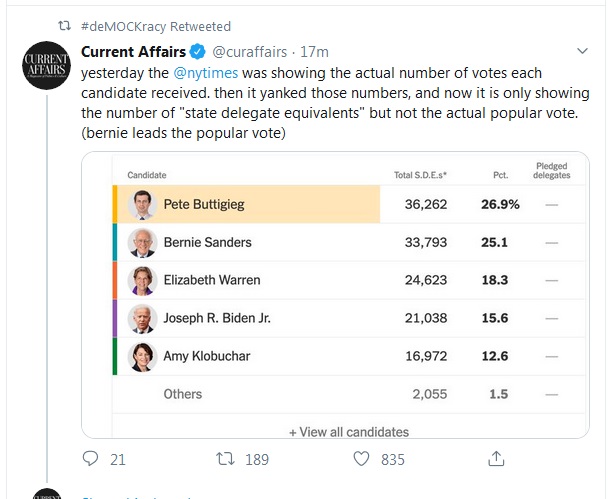 Despite all of this documented fraud, Sanders still won the popular vote and still pulled ahead of Buttigieg in SDEs. Right as this happened, the counting was stopped again. This time, the national party will recanvas, which means look at the altered tallies rather than the popular numbers, and announce their fixed totals.

This will be done on February 29th, the Saturday before Super Tuesday in order to give the Sunday papers and talk shows more fodder to prop up their chosen candidates.

The Mockingbird will continue to cover this instance of obvious coordinated fraud and all the election fraud that is bound to come in both the primary and general election throughout 2020.